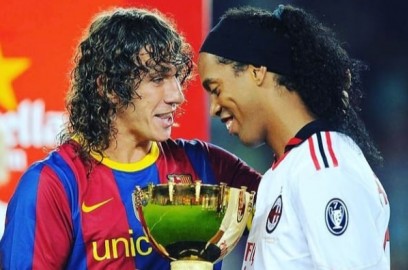 Are you wondering how to deal with a situation when you have big dreams and professional plans to play in the best clubs, and you do not receive offers, even from average teams?

Do you think you have no chance because someone once told you that you lack talent ??

Well, talent is only 1 percent of whether you will succeed or fail.

If you are fully healthy, both physically and mentally, you can achieve absolutely anything and the key aspects are completely different than talent and the best proof of this is Carles Puyol, the legendary center-back of FC Barcelona!
Carles Puyol, when he wanted to join the FC Barcelona academy in his youth, was rejected as many as 6 times and each time in the club it was considered that he had absolutely no chance because he was simply too bad a player in every respect!

In the reports he received after the tests, it was said that he was technically at a dramatic level, and he was physically poorly prepared in terms of muscle mass, strength and speed.

When he was rejected for the 6th time, he decided not to wait idly for the next tests in order to have to listen to the negative answer again.

In addition to training in his amateur club, he decided that he would individually correct all the shortcomings mentioned in the test report!

He decided that apart from training at the club, he would train individually twice a day!

In the morning he trained technique and ball control and in the afternoon he ran over the hills to develop speed and leg muscles.

At first he was only able to run two kilometers, then four, etc.
After some time, when his strength and speed developed, he would race with passing cars.

When, after a year of club training and individual training, he appeared for the seventh time, he was accepted after the first stage of testing and the talent hunters could not believe that they were dealing with the same player that he said not so long ago that there was no chance of getting into professional academy!

As you can see, the key aspect of Puyol's success was not talent, but a complete change of mindset, hard work, perseverance and the ability to learn from criticism!

This story shows that if you are stubborn, never give up and are willing to work extremely hard, anything is possible!

Someone may say that not everyone has a chance to be tested in Barcelona.
That's true, but to be at the professional level, you can start from a different club and achieve a lot as well!

Today you can take advantage of opportunities that were not there in the past, such as promoting yourself on portals such as FTT, where you just need to register for free and add training and match videos that you record using your smartphone!

Thanks to this, you are watched by hundreds of clubs, talent scouts and managerial agencies from around the world without leaving your place of residence!

Do you train every day both in the club and individually? Are you already registered on the portal and are adding video of matches and daily training to be under observation and have a chance for offers?

If this article finally helped you understand what is really important in becoming a professional and you appreciate the work that portal staff do every day to help you achieve your goals, please like this post and share it further.
Also write in the comment the name of the club you want to play for someday and contribute to its success!

AJAX SPORTS DIRECTOR REVEALS A MYSTERY WHAT TO DO TO SCOUT CHOOSE YOU DURING THE TEST!
Read more

WHICH ELEMENTS YOU NEED TO BE IMPROVED TO SHOOT MORE GOALS?
Read more

THE ONLY THING THAT DOES NOT ALLOW YOU TO GET OUT OF THIS AMATEUR LEAGUE IS FEAR! #MOTIVATIONMONDAY117
Read more
All rights reserved. ©
Design and implementation: